"CHILDHOOD MEMORIES" - Stories about my childhood in Slippery Rock (8)

TXTommy
I began this blog with short stories of childhood hunting and fishing ("A Boyhood Afield"). As I detail, my hunting and fishing interests were inspired by my father and older brother. After some prodding from my childhood friends I began a series ("Childhood Memories") about growing up in Slippery Rock. "The Flig Stories" were inspired by a book I read by another Tom Fleeger. The most recent series of stories are entitled "What's Golf Got to Do With It". That's how I occupy a lot of my time in retirement. I live in Burleson, Texas with my wife, Lynn. I have two great sons, two wonderful daughters-in-law, and a sweet granddaughter. They all live in Portland, Oregon.

THE SLIPPERY ROCK I REMEMBER 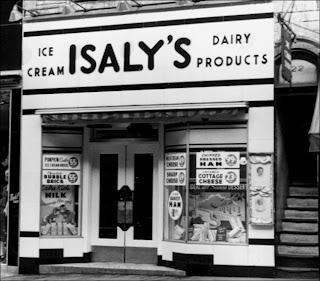 Fifty years ago the small college town of Slippery Rock was so much different than it is today. So is the university that bears the same name. Here’s a walk down Main Street as best I can recall from the late 1950s.

We lived at the southern edge of town on South Main Street. It was a coincidence that we lived next to the Ford dealership and the Catholic Church while my dad worked at the Chevy dealership, and we went to the Methodist Church. As I would walk north toward town I would pass the college on my right.

At that time it consisted of only about a dozen buildings (the SRU website lists 70 today). First I would pass West Gym. The neighborhood rabble that I ran with could usually find a window that had been left open at this deteriorating old brick building so we could sneak inside for a basketball game. Beside it was East Gym. It was in better shape and had a pool in the basement where I learned to swim. A hundred feet from East Gym was the chapel. The college choir sang a Christmas program there each year and they brought kids from the elementary school to hear it. My sister recalled how it had padded pews which was unique for a church in those days. Next you would come to East Hall, the only boys’ dormitory. As I recall it (like many of the buildings) was in pretty bad shape. The life there may have made “Animal House” look tame by comparison. It was a place you stayed away from. On the other hand, North Hall, the girls’ dormitory was one of the nicest buildings on campus. It also housed the dining hall. I can recall we used to hang out around North Hall on our way home from school for a possible chance meeting with one of our student teachers. I always had a crush on one of those beautiful young women. Behind North Hall was another frame building that was sort of dilapidated. It was just known as “The Hut”. I suppose it was the forerunner of the student unions of today – a hangout for the students where you could get a sandwich or a milkshake. Nearby was the Science Building that overlooked the tennis courts, the power plant and the football stadium. The stadium was smaller than many high school facilities these days. It had steep grass slopes down which we would slide on big pieces of cardboard (until the grounds crew ran us off). A stones-throw away was the college dump where we used to shoot rats and grackles (see article on Shooting Sports).

On the town side of North Hall was a cluster of buildings - the Maltby Library (the only building then that was named for someone), the president’s residence, Old Main, and West Hall (a classroom building that probably should have been condemned). Finally there was the Laboratory School. The “Lab” school for short was somewhat unique. It was a K-6th grade elementary school which my pals and I attended; however, it belonged to the college. Since Slippery Rock was founded as a state teacher’s college I guess they figured we kids were like lab rats for the student teachers. The baseball field was atop the hill behind the president’s house and where we had our last day of school picnic due to its proximity to the Lab School. That was it – the entire SRU campus in the ‘50s.

Across Main Street from the college’s entrance was Watson’s store (later to be known as Lape’s, Hines, Dunkle’s, and more – it changed hands often). It was probably no larger than 30’ x 40’ but it contained all the essentials for the “convenience” store of the day – two pinball machines, two glass penny candy cases, pop, milk, bread, lunchmeat, ice cream, cigarettes, magazines, etc. We spent many an hour trying to “beat” those pinball machines with money we got from returning pop bottles for the deposit. I can still hear that load crack that the machine made when you won a free game. There were two benches out front where we spent a lot of time “loafing.” I remember one time someone had left a pack of cigarettes there and we pounced on them with the intent of smoking them – until someone piped up that it may have been a trap and someone might have “mouthed” them all before they put them there. We threw them away.

Another block north on Main Street, past a small park with a war memorial one would come to the main business district. On the west side of the street there was the post office. It was a new facility at the time but has since been replaced with a newer one. Across the street was Joe Spitaro’s barber shop (where my buddy Bruce Gannon first worked after he got his license). Down the street was Bill Matthews’ barber shop where I got my hair cut. Dad would call Bill and tell him to give me a crew cut. Then I would ask Bill to make it longer and he would just say, “Sorry, I’ve got orders from your pap.” Ord’s Pharmacy was next. (Mrs. Ord was my 5th grade teacher and the one with whom we listed to Mazzeroski’s homer in the World Series after school.) Nearby Fred Meyer’s hardware store was next to Dale Taggart’s jewelry store (I think Dale’s daughter still runs the place). The Isaly’s restaurant/soda fountain was there as well. Isaly’s was the place to go for all the gossip going around town (and a cherry coke or chocolate malt). My sister’s friend’s father, Joe Zanhiser owned the store at the time. He was a rotund, red-faced man with thick glasses and you could always find him behind the counter. It seemed the same group of patrons (like Crankshaft West, Harry McConnell and Heavy Boyer) were there all the time. One time the Pittsburgh Steelers were having training camp at the college and Preston Carpenter struck up a conversation with my sister in Isaly’s. It was a big deal and noised all about town! Later on a high school friend Bob Allison’s dad bought the store from Zanhiser.

If you can believe it Slippery Rock supported two small groceries situated close to one another on Main Street – the A&P and Freidman’s. These were not the modern supermarkets but the old fashioned groceries that were partial self-service and partial “the grocer will get it for you” stores. There was also the Roxy theater where owner, Ed Shaffer walked the aisles to control the rowdies and couples trying to make out in the back row while his wife sold popcorn and jujubes. (The cost was a quarter for kids and 60 cents for adults.) The News Stand sold various magazines, newspapers, cigarettes and cigars. The Slippery Rock National Bank was there as well.

Across the street was one of the town’s three restaurants – Hubers – a small stone building that still houses a restaurant (now the Camelot). The Ben Franklin five and dime was next door. I spent lots of time there, mostly wishing not buying. Then there was Ubers furniture and appliance store right next to their funeral parlor.

There was a gas station on the corner and if you headed east on Franklin Street you came to the town’s second pharmacy and third restaurant (their names escape me). Across Franklin was Curley Martin’s butcher shop and then the three protestant churches right in a row – Methodist, Presbyterian and United Presbyterian. On down Franklin Street a half block was my dad’s car dealership (JW Cheeseman, Inc. at the time). Behind the dealership was the little league baseball field.

That was pretty much the town. It was such a great place to spend your childhood. There were homecoming parades, big football games, Christmas decorations, major snow storms, and so many other neat things to see and do with family and friends.
Posted by TXTommy at 11:18 AM